Recent studies have shown that HPV has surpassed tobacco as the leading cause of mouth cancers (75% of mouth/throat cancers are caused by HPV). While it is a fact that HPV and/or smoking & drinking could be the culprit, it is also a fact that the type of cancer that Mr. Douglas was treated for is the kind that is most often connected with HPV … and detected mostly in men.

Don’t fear, there are ways to better protect yourself from the worst strains of HPV: 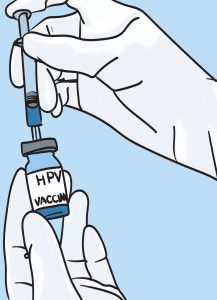 Vaccinate: Most sexually active adults have at least one strain coursing through their system, and to deplete the future numbers of the infected, science has come up with two vaccines called Gardisil & Cervarix. When dosed to anyone under the age of 26, these vaccines can guard the host from up to eight of the most virulent strains in men and women that are responsible for some cancers of the cervix (nearly all cervical cancers are caused by HPV), anus, penis, vagina and vulva as well as genital warts.

If you are a parent, getting your child vaccinated against the most virulent strains of HPV before they reach sexual maturity (ideally around the ages of 11 or 12) is recommended. Vaccines are given in a 3 dose series for males and females and the possible side effects are uncommon and pale in comparison to what could result from not vaccinating. The vaccine does not work retroactively and therefore has no therapeutic effect on someone who has already contracted HPV.

Though scientists are currently working on additional avenues with which to prevent the spread of HPV, doctors agree it’s important that men as well as women take the steps needed to prevent spreading HPV further.