News and information relating to recent and upcoming Trade Shows. Find the Sliquid sales team in action, on location! 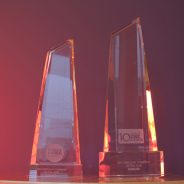 “This year’s XBIZ Awards has an expanded list of categories and is anticipating record attendance. Sliquid is honored to be chosen as finalists with some of our best new products,” says Dean Elliott, Owner of Sliquid, LLC.

Naturals Satin is an Aloe and Carrageenan infused, water based intimate moisturizer, and is the first Sliquid product designed for daily use, not just during sexual activity. Created for women who are experiencing regular or periodic dryness due to menopause, medication, or any other reason, Satin will provide long lasting, natural comfort with only a few drops. A proprietary blend of natural moisturizers, including natural extracts of Carrageenan, Aloe Vera, and Vitamin E creates a natural feeling moisturizer that emulates your body’s own natural lubrication.  Sliquid Naturals Satin, like all Sliquid products, does not contain any parabens, DEA, or sulfates, and is always 100% vegan friendly.

Ride Rock Delay Spray is a male desensitizer, formulated to enhance men’s stamina and prolong the joys of intimate relations. Ride Rock is a benzocaine based formula, using an impressive 7.5%, which makes it an extremely fast acting topical desensitizer. Hold on to your hats boys, you’re in for the Ride of your life!

Elliott continues. “We look forward to kicking off 2013 with a great show, always encompassing new products and features, and of course the big night announcing the winners of the XBIZ Awards … all of which will be very exciting for everyone involved.”

For more information about Sliquid’s product range or to place an order call:
(800) SLIQUID or email sales@sliquid.com.

ABOUT: Since 2002, Sliquid has manufactured the world’s finest all natural lubricants. Formulated by sensitive women for women who are sensitive and always putting consumer safety first. Sliquid lubricants contain no parabens, glycerin, or glycol. Today, Sliquid offers over 60 products spanning a full range of personal lubricants and personal cosmetics for men and women using only natural and vegan friendly ingredients. 2010 saw the launch of the manufacturer’s newest brand Ride Dude Lube for men, which has already become a hit worldwide.

January 2012 saw a few changes in the world of adult novelty products, and one the the big moves was adult biz magazine XBIZ taking a huge step forward in the adult convention and awards arena. Though they have been presenting their awards for a decade now, 2012 was a giant leap in terms of the size and industry awareness.

And to make things even better, Sliquid took home the top prize for lubricants! The Sliquid brand was nominated and won “Best Lube of the Year” at XBIZ 2012. Thanks everyone!

July is always a busy time the folks at Sliquid, and this year proved to be no exception. July 2011 had the Sliquid team in Sunny Southern California for back to back tradeshows from AVN and ANE. It was crazy, hectic, fun, and all kinds of other great adjectives, but the icing on the cake was the annual “O” Awards from AVN, where the newest member of the Sliquid family, Sliquid Sea, won the award for Best Lubricant! It was an honor just to be nominated, and we are blown away to have won the “O” Award twice now for Sliquid! Thanks to all the fans who voted, and many thanks to AVN!

If you are unable to make it to Las Vegas this January for the tradeshow and festivities, you can always catch up after the fact on Showtime, who has broadcast the Awards show for many years, though the adult novelty awards probably won’t make it out of the cutting room. If you are in the review industry, put in a good word for Sliquid!

To see the complete list of nominees, check out http://avnawards.avn.com/2011_nominations.pdf

The 2nd annual AVN “O” Awards are fast approaching (August) and every vote counts! Sliquid was nominated for 2 awards last year, and Sliquid Organics was one of the big winners, taking home the prize for Best Lube, Lotion, or Potion. So let’s keep the ball rolling, and try to take it home once again! Every vote counts, so take a few minutes and nominate your favorite female friendly lubricant. Vote for your favorite product, or vote for the entire line. Here’s how to vote:

Deadline is July 1st. All nominations MUST include: Category, Nominee, Your Name, Title, Company and Contact Info (email & ph#).

And here is a quick list of the available categories.

On behalf of the ENTIRE SLIQUID STAFF, thank you for your continued loyalty and support!

See you at the red carpet!

Sliquid is off to ANE…

The Sliquid office is in a bit of an uproar today as we scramble to get everything together for the Adult Novelty Expo, which starts on Monday. We are heading out tomorrow morning just to give ourselves a little extra time to prepare and set up. Sliquid exhibits at ANE every year, and it is one of the better novelty shows out there. This year’s show is especially exciting, for more than one reason…

We will be announcing Sliquid Organics O Gel, the newest Sliquid product family member. We have talked about releasing our clit stim for a few years now (yes, years. We apologize) and it’s finally here! O Gel is formulated with Peppermint Oil, Sweet Almond Oil and Menthol, for all natural, L-Arginine free clitoral stimulation. Talk about timing!

This is the first week we are back in the offices from this year’s International Lingerie Show in Las Vegas. Thanks to all of you who stopped by the booth to say hello and place your orders for our new and existing products, and especially to those who came to see what all the buzz is about and have joined the Sliquid family.

The show was a success, despite being moved into the side room, and not having the coveted corner booth this year. We were definitley in the right place – NJOY, Sliquid, Oh Mi Bod, and WeVibe all in a row. Quality was abundant in our aisle.

The fashion show was a lot of fun this year, with many sexy models showing off the new fashions for Halloween this year.. There was also a model throwing out products from Oh Mi Bod – the crowd was going crazy for them!

All in all, we love dour time in Sin City, Vegas was a great show, and a great time, like it always is. Next up for Sliquid will be the ANE show this July in Universal City, Los Angeles. Take a minute to drop in and say hello.

For the first time, Sliquid will be on hand at the infamous Venus Berlin Show this October. (Oct 18 – 21, 2007) The Venus show is the European answer to the ANE and AVN shows combined, and brings together businesses and clients from all over the world. Sliquid will be exhibiting side by side with NJoy and OhMiBod at the Venus show this year, so make sure to drop by the booth so you don’t miss out on the newest innovations from these three brands.

It’s that time of year again, and the Sliquid crew is heading out to Las Vegas, NV for the International Lingerie Show! This year the show is going to be held at the Rio All Suite Hotel and Casino, right on the strip! The show is running Monday, October 9th through Wednesday, October 11th, so make sure to drop in and say hello if you are going to be in the area.So what’s new this year for Sliquid? We will be introducing for the first time our newest product, Sliquid Smooth! Sliquid Smooth is a luxurious intimate shaving cream, though its great for shaving anywhere ladies or gentlemen need to remove unwanted hair. There are currently 4 scents available in Sliquid Smooth, mirrored after our Sliquid Splash line of intimate washes.Naturally Unscented, Spring Blossom, Honeydew Cucumber, and Grapefruit Thyme are the first of the line, both for Sliquid Smooth and Sliquid Splash.Also to be unveiled at the International Lingerie Show this year will be the new packaging for the Sliquid Splash line. It’s sleek and sexy, and you don’t want to miss it!The International Lingerie Show is the industry’s premier B2B event – bringing together qualified volume Buyers with Manufacturers from around the world. Sliquid wouldn’t miss it, and niether should you!Check out www.sliquid.com for more information.Play Safe, Longer!800 SLIQUID

What is on you goes in you

I buy Sliquid Organics because they are made out of natural, organic ingredients. If medicine can be delivered through your skin, you can be sure that ANYTHING you put on your skin enters your body as well.

This is a high-quality product

The Oceanics sliquid is phenomenal! So much better than any other lube I've found. Doesn't get sticky or gross. Stays smooth the whole time. Even better, I can pronounce every ingredient.

My and my girlfriend's favorite lube. Great for toys. Long-lasting and never sticky. No smell or taste. Never causes irritation.

As close to a healthy discharge as you can get! The product has become a daily part of me! It’s like youth serum for the below half. Beautiful product!!

I have a very sensitive body and am always just trying to find stuff that doesn't make it go crazy. To put it in perspective, I can't even use the "for sensitive skin" lotions. So to have no issues whatsoever was amazing! Absolutely love it, my on...

Received ... but yet to use

I purchased these lubes with intent my husband would be returning from deployment to Afghanistan soon ... but with COVID, that return has been delayed indeterminately. So .... I’ll wait!